In the store where Batou has his vision hacked, and the dolls’ dinner table in Kim’s manor, one might discern the black and white tiled flooring in both scenes.  This checkerboard floor pattern can also be found in Angel’s Egg, especially when the “soldier” stands on the open field in the beginning as if he was a small chess piece, a bishop himself.  The sole interpretation I provide in my book is the checkered flooring derives from Solomon’s Temple and hints to a religious connotation.  In addition, and this is one for the conspiracy theorists, the black and white flooring can relate to masonic lodges, where ritualistic practices are performed and are often associated with the secret society “The Illuminati.”  However, in having thought about it more, I finally concluded the black and white floor tiling in Oshii’s films are mainly alluding to Lewis Carroll’s “Through the Looking Glass” than anything else.

There’s even a passage from “Through the Looking Glass” that uncannily describes the opening scene for Angel’s Egg:

“For some minutes Alice stood without speaking, looking out in all directions over the country- and a most curious country it was. There were a number of tiny little brooks running straight across it from side to side, and the ground between was divided up into squares by a number of little green hedges, that reached from brook to brook. ‘I declare it’s marked out just like a large chessboard!’ Alice said at last.”  (Carroll, pg. 18-19, 2016).

In considering Oshii has used mirrors in his films for conveying the fragility of identity and the self, and thus the characters enter “through the looking glass” and into Wonderland, it seems possible Oshii took the chessboard theme from Carroll’s novel to visually articulate this transition where the characters find themselves suddenly stuck between the real and the imaginary.  Checkered flooring and allusions to Alice in Wonderland are also found in the Wachowski Brothers’ The Matrix, the film which Ghost in the Shell inspired. 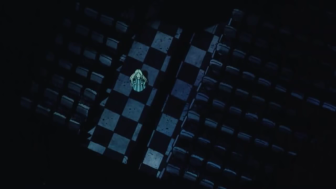 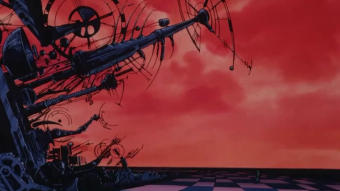 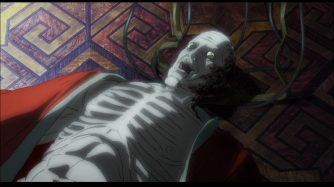 During Batou and Togusa’s trip to Kim’s study, one can see there are spirals carved into the flooring.  Spirals are often used as a symbol in Oshii’s films, and the spiral can denote the cyclic processes of birth and death.  This significance of the spiral nicely ties in with Innocence’s theme of reanimation in shifting from the animated to the unanimated and vice versa.  Additionally, other cyclic imagery can be found throughout Innocence, from the holographic “Pursuit Vehicle Checking System” in Batou’s sight warning him of imminent attack, the gears on the Locus Solus music box, to Togusa’s tea inexplicably swirling in its cup after Togusa’s cyberbrain is hacked.

Interestingly, in Volkerson’s home, there is a brief shot of Volkerson’s blood where his corpse lied.  Take notice the carpeting has white flowers, each having eight petals.  Later on, in Kim’s office, adjacent to the spirals in the wooden flooring can be also seen eight sided figures that are similar to the images of the flowers stitched in the carpeting of Volkerson’s home.  This eight sided flower is likely a visual reference to the white lotus, an eight petal flower that, in Buddhist thought, is said to represent purity and spiritual perfection.  What is explored in Innocence is Batou’s spiritual journey that is not so different from a Buddhist monk’s.  With the spiral connoting to the cyclical process of life to death and then back to life, being juxtaposed to the white lotus, Oshii is likely invoking the basic principle of Enlightenment, where a “Buddhist finds the truth about life and stops being reborn.”  (Source: https://simple.wikipedia.org/wiki/Enlightenment_(Buddhism)).  With all the mirrors in Innocence, this expression of self-reflection evokes our own self-consciousness, what seems to be antagonized in the film, for “the only way to bring an end to the very possibility of enduring sorrows again is to stop being reborn as a conscious being” (Encyclopedia of Buddhism, edited by Damien Keown and Charles S. Prebish, pg. 558).

Furthermore, the pathway to Kim’s mansion, which is also checkered, may be alluding to “The Middle Way” in Buddhism.  The Middle Way is the “Noble Eightfold Path,” a principle teaching in Indian Buddhism, signifying the path which leads to liberation from the “Wheel of Samsara,” the eternal wheel of suffering.  The wheel of Samsara, and Batou’s spiritual journey in Innocence, are much more fully explored in my book.

Search for Film by Title

Book on Oshii’s Films Available for Purchase on Amazon.com