One interpretation of Innocence I was the most reluctant in making centered on Oshii investing his more autobiographical sentiments into the character Batou.  Typically, one should be especially cautious when making claims or assumptions as to the private life, or even psychology, of the artist in relation to what they communicate in their work.  However, in order to better understand the filmmaker’s work, one has to take into consideration what might have been occurring in their personal life at the time they were involved in the film’s creative process.  I think this is a crucial facet to Innocence as Oshii manifested complete creative control over every aspect that went into the film’s production.  When the world of Innocence involves cybernetic characters living their existence through the bodies and minds of others, the technicality of the film’s medium merging with the expression is a befitting opportunity for Oshii to impress his more personal sentiments and experiences into the main characters. 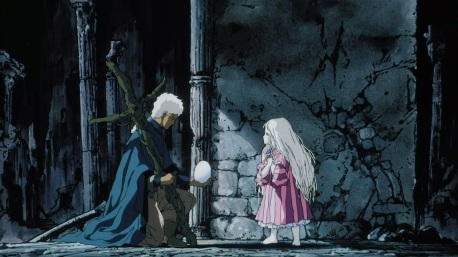 Generally, Oshii’s inclination for self-inclusion was perhaps first fully realized with Angel’s Egg.  Yoshitaka Amano, who had a hand in the story, mentioned the film might have been influenced from what was going on with Oshii’s own life at the time.  Amano remarked, “Oshii was getting divorced and he had a daughter he couldn’t see.  So he felt that he was creating some unhappy memories and unhappy times for his daughter, and perhaps that experience resulted in Angel’s Egg.”  Incidentally, ever since Angel’s Egg, Oshii has often returned to protagonists who are haunted by a former lost love.  It is evidenced with Koichi and Midori in The Red Spectacles, with Inui and Tang Mie in Stray Dog, with Tsuge and Nagumo in Patlabor 2, with Batou and Kusanagi in Ghost in the Shell, and finally between Kannami and Kusangi in The Sky Crawlers.  In each film, emanating are melancholic overtones surrounding the more romantic dynamics between the characters.  That Oshii is conveying a long held melancholy with the separation of his wife and daughter seems particularly apparent with Major Kusanagi in Ghost in the Shell and Innocence, a woman who Batou has lingering memories of and fleeting interactions with but one he has no real physical connections with.  The first Ghost in the Shell concludes with Kusanagi merging with The Puppetmaster (what Kenji Kawai’s score implies as their “marriage”), leaving Batou alone.  Batou attempts to resurrect Kusanagi by finding her a replacement cybernetic body of a young girl, who also incidentally leaves Batou behind with the promise of returning to him.

With Innocence, it is likely that Batou, a single man whose only companion is his basset hound Gabriel, represents Oshii at his current life while Togusa, the family man with a single daughter, was what Oshii was in his past life.  Major Kusanagi and the young girls in Innocence, as interrelated with Batou, could all perhaps be derived from Oshii’s personal sentiments regarding his distant relationship with his wife and daughter.  Innocence may thus mainly just be an inner conversation Oshii is having with himself.  Another funny possibility is that the character Kim could be based on an actual producer from the anime industry Oshii has bumped into in the past.  Take note that Batou and Togusa both have to venture to the second floor of Kim’s manor and also to the second floor of the Yakuza business “The Wakabayashi,” in order to meet with the head boss of both settings, what seems mirrored with Chief Aramaki’s office.  This reminds one of what Oshii once mentioned when meeting with a Bandai Visual producer for the first Ghost in the Shell film: “The second floor of the sushi restaurant is somewhere ‘special.’  It’s a very intimate room where you want to talk about something secretive.  It’s actually not a good thing when a producer offers to take you to sushi on the second floor.”  In Innocence, the Yakuza’s office, the Wakabayashi, even closely resembles a sushi establishment.  Now this may sound like a stretch, but the coincidence is just too striking enough not to consider the possibility Oshii is playing off of his experiences in the anime industry as expressed through Batou and Togusa, who are indicated in the film as being doppelgangers of each other.  Additionally, Oshii has expressed his desire in having creative control by working with fairly low budgets, and thus it seems Oshii has never really cared about making money in filmmaking but is nevertheless having to work with producers who do care about profits.  As Kim’s eyes are painted gold, he is thence depicted as one who sees only wealth, whereas Batou sees it for what it is, an illusory empty deception which yields no personal contentment.

After finding the kidnapped girls, there is a rather despondent moment when Batou looks upon the lifeless gynoid body which Kusanagi possessed after she leaves him once again but promises to always be near him.  It is suggested that Batou will still be haunted by his loss of Kusanagi.  However, in Batou having been separated from Gabriel and Togusa from his daughter, Innocence concludes with there being a sense of restoration with the children having been returned to their parents and thus a sense of peace is settled upon.  The film’s final scene even shows Batou waving farewell to Togusa with Gabriel’s paw as he remarks, “Hanging out with someone else’s family just isn’t my thing,” almost as if Oshii was bidding farewell to his former self, the family man he briefly once was but never actually became in real life.  Such an emotional transition for Oshii towards affirming a form of personal reconciliation comes across as being more evident with his next feature film, The Sky Crawlers.  In The Sky Crawlers, the female character Kusanagi has a daughter who is fatherless, but it is suggested the child is the daughter of Jinro, the man Kannami used to be but who he no longer is.  In reflecting on her experiences in working with Oshii on The Sky Crawlers, screenwriter Chihiro Ito said, “This has little to do with the writing process but Oshii-san’s daughter is coincidentally the same age as me.  He often told me about his feelings as he could meet again with his daughter after a period of separation.  This inspired him to make a movie that addressed young people.  Maybe that was partly it but every week we met, he seemed to gradually change.  He became more and more physically fit.  His fashion changed too.  I don’t really know why he changed but it seemed to me that Mamoru Oshii had started a new era.”  Indeed, in recent years, Oshii has changed aesthetically and thematically, as attested with Garm Wars: The Last Druid to Nowhere Girl.  That sense of loss for a former love no longer seems to be present in his work.

Search for Film by Title

Book on Oshii’s Films Available for Purchase on Amazon.com